The yellow vest protests began over a month ago due to eco-taxes and increased petrol and diesel prices. However, although gas tariffs have now decreased by 2.4 percent and pump prices have since fallen dramatically with the world oil price, the protests have shape-shifted into a wider cry of anguish against the high cost of living, unemployment and poor local services in small provincial towns and outer suburbs of the thriving French metropolitan areas. Students have also joined in to protest recent changes relating to education. But where does the symbol of the yellow vest come from and why is it so important to their cause?

Who are the gilets jaunes?

While there were a number of Paris-based politically-driven casseurs from the extreme left and right at the heart of the violence, the overwhelming majority of the yellow vests who hurled paving stones at the police or overturned and burned cars were from the French provinces. Of the 287 people arrested on Saturday, two thirds were from outside Paris. At least 70 per cent of protesters were provincial workers from suffering areas of northern or western France or from the outer Paris suburbs.

There was also violence on the margins of largely peaceful gilets jaunes demonstrations in Avignon, Marseille, Bordeaux, Toulouse, Nantes, Tours and Dijon. But no other city saw the kind of systematic destruction that was inflicted on some of the grandest and most famous avenues in the capital this month.

Emmanuel Macron and his government were undoubtedly slow to take the movement seriously, but it is foolish to blame the long-standing problems of peripheral France on a president who has only been in office for 18 months. Rather than further inflaming tensions by pointing the finger at Macron, perhaps it is time for opposition politicians in France to stop pretending he is the only source of yellow jacket anger.

From bonnets rouges to gilets jaunes

The bonnets rouges movement was revived in Brittany in recent years to protest an “ecotax” on trucks using French roads. However, this was only after the region experienced rising unemployment, a cessation of European export subsidies and growing support for Breton autonomy. For the gilets jaunes, increased fuel prices were the tipping point for existing discontent over the economic situation of those living outside of metropolitan areas. The underlying causes of the movements thus have many similarities.

So why is yellow the new red?

Brittany has long been protective of its region’s culture, from its beurre salé to its gwenn-ha-du. The red hat of the bonnets rouges movement has been claimed by the Bretons as a symbol of their fight for greater autonomy. On the other hand, the yellow vest is readily accessible to all French people, including those outside of Brittany, who own a car. In fact, it is a requirement by French law to carry one in every vehicle in the country. The yellow vest, as a symbol of discontent with fuel prices, then becomes a call-to-arms for all vehicle owners across France, as these are the people who are affected by an increased cost of fuel.

This accessibility, along with the recent origins of the symbol, may just be the key to the movement’s high number of followers. Paradoxically, it is likely that this symbol has caused people to lose sight of the movement’s original cause. The symbol is designed to be one that is accessible to all French people. However, in relation to vehicle ownership, the law that requires vehicle owners to carry a yellow vest is relatively new. Furthermore, we are not accustomed to seeing all drivers wearing a yellow vest, so there is no visual association between drivers and yellow vests. This is where the movement begins to lose the connection between its original purpose and its chosen symbol. Traditionally, the yellow vest is worn by workers, particularly labourers. We see them on construction sites, mines and other labour intensive worksites. For the French, the connection between the yellow vest and the economic difficulties faced by workers would have been much stronger than the connection with vehicles alone. Therefore, the yellow vest has become a more generalised symbol of discontent with the government and emphasises a ‘workers’ versus ‘government’ dichotomy that allows the people of France to vent their frustration at years of economic hardship.

What about the student dimension?

As the target of the yellow vest protests has shifted from fuel prices to President Macron, students have joined in to demonstrate their discontent with new policies that will affect students, including changes to the final three years of school and the reintroduction of mandatory national service.

The changes that the yellow vests stand for will also affect the futures of these students. “There are many reasons why we’re protesting but our anger comes from the same place as the yellow vests and the government has made some really destructive reforms. It’s in our best interests to be on [the yellow vests’] side”, the President of the UNL student union, Louis Boyard, told media. 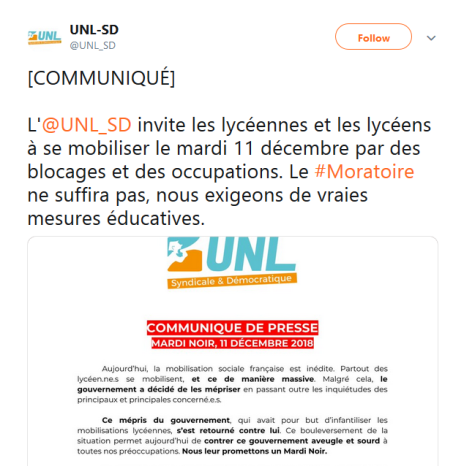 Is the gilets jaunes movement a protest, or a revolution? And what exactly is it hoping to achieve?

Many yellow vests are frustrated, suffering people that no longer believe that any of the mainstream political movements will do anything to help them, including Marine Le Pen’s far right or Jean-Luc Mélenchon’s hard left.

They talk of a new “movement of the people and for the people” but have so far failed to choose recognised leaders or to put forward a united programme. When eight gilets jaunes spokespeople were chosen last week, they were immediately repudiated by other parts of the movement. Six of the spokespeople refused to attend a meeting with the Prime Minister Edouard Philippe after receiving violent threats from other gilets jaunes.

In other words, this instant, anti-political, political movement not only detests the young technocratic President who was elected only last year. It detests anyone from within its own ranks who “put themselves forward as above the rest”, as this would interrupt the ‘workers’ versus ‘government’ dichotomy that the movement stands for. As a result the gilets jaunes risk falling into the clutches of a destructive, anti-democratic fringe – not a fringe of revolutionary-minded entry-level political types, but a fringe of desperate and unthinking people from within the movement itself.

John Litchfield, a correspondent who witnessed the riots first-hand, believes that a pacifying dialogue may yet emerge, but fears that the insurrectional casseurs who resorted to violence and looting in Paris at the start of December have no interest in dialogue. He says that “they simply want to vent their anger – and, yes, their hatred – on a ‘bourgeois’, successful Metropolitan France which has ignored them for decades”.